Don’t turn on the flock

@ForgedaNohledge posted a fantastic rebuttal to Andrew Tate saying that the “slave minded” sheep are the problem. As someone who’s life is threatened he can’t be accused of not having a stake on the issue.

He posts his rebuttal across 4 clips:

I’ve stiched them together as audio here:

As a personal note I can attest to feeling betrayed by how people have acted during the covid crisis. ForgedaNohledge correctly points out that the people whipped up into a frenzy over covid are themselves victims of the agenda. My other half has consistently reminded me that I am privileged to be in the position to spend countless hours to do my own research on things I find pressing. It is tempting to take one’s own situation for granted and then judge others. 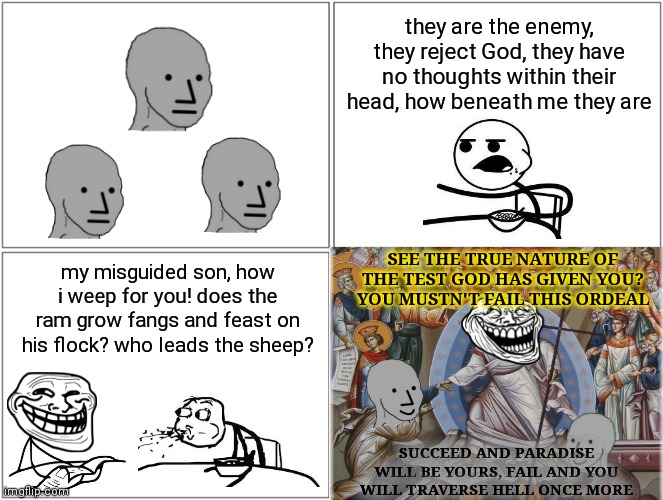 People who have families and/or demanding jobs aren’t always in the position to immediately distinguish, reason against, and ultimately overcome well-funded highly coordinated propaganda campaigns. This doesn’t excuse those in positions of authority from criminal or civil liability, but it is a reason to forgive many of those who may have wronged you. The proper way to heal the massive wounds that were torn and salted during the Covid Crisis is for those who orchestrated and profited off its execution are not only prosecuted under the law, but also give restitution to those they harmed.

Dehumanizing those who simply didn’t have the ability or disposition to turn over every rock despite nearly all in authority telling them not to isn’t the right answer. I can understand the anger, to many of us I’m sure mask wearing does perfectly symbolize the very essence of what allowed this tyranny.

I recommend watching We need to talk about Mr Global in all its parts, but part three is particularly important to this discussion.

CJ Hopkins brings up many important points about how coercion is consistently used to pressure people into participating in tyranny. Many of the people aren’t actually deceived, but rather they are correctly identifying the incentives at play.